A head in the clouds

The distance that separates Valentín Alsina’s bridge from the “Black Heart”, located in Camden Town, should be approximately 11,500 km. I wonder if “Mosca” Velázquez and Alejandro Ainadjin, -“el Papa” to his friends -, those two kids who started the 2 Minutos´ trip thirty years ago; ever  notice a similar distance when looking back. I guess at that time they did not even imagine reaching the age of thirty … alive.

And boy, they are alive!!

Both arrive in London as part of the European leg of its 30th anniversary tour with Pablito and Pedro on guitars and Monti on drums. To celebrate this ceremony, nothing better than a venue up to the task – the “Black Heart”, one of those dives suppurating vice in every crack of its walls -, and cool hosts as well.

Local band Brocker, opened the show with a well – balanced mix of punk, rock and a pinch of ska. Its stuff is extremely sincere made of convincing straight – to – the – point repertoire and some frenzied covers of The Ramones or Motorhead. All topped up with such an indomitable anthem of their own rightly called “Gimme Gimme Rock n Roll”.

The echoes of the beautiful Gretsch guitar wielded by the singer of Brocker had not faded away yet, when a guy approaches the microphone and seems to make an attempt to introduce 2 Minutos. Nevertheless the audience, mainly Argentines, does not seem to be very aware of his speech but rather impatient for the sonic attack to begin.

Displaying (almost) British punctuality the five members of 2 Minutos jump on stage. At first look deceiving: is there so much punk rock within these five gentlemen? The answer is yes. The first number is a jab on your jaw. Hardly without pause “Valentín Alsina” and “La casa de Juan” storm the joint while first pogos are unleashed.

Up to this point the band happens to be rolling hard and it’s about time to show off Jason’s mask. Then Pablito asks us to leave room. There is a guy among the audience who “looks like Capusotto”. This is Knox, singer of the mythical The Vibrators, whom the band met the night before and invited him to drop by the concert. May God (May the Devil) bless this nightly entente.

The influence of 2 Minutos is profound over the Latin American punk rock scene. And, above all, the songs of his first album are the most  appreciated  by the audience. The moment I realise that the place is bursting out coincides with that any of the songs from this album are being played. Also, from time to time, I notice the floor is dangerously trembling. Concerts at the “Black Heart” are confined to the upper floor. Will we all end up wrecked down on the ground floor tonight?

“Nada que hacer”  sounds like pure punk nihilism, while “Demasiado tarde”  unleashes a wild pogo and divides the audience: those who dance and those who record the dancers with their cell phones, perhaps waiting for someone to be kicked out at any time. A big guy is involved in all the fuss. I notice he is wearing the Pumas T-shirt. Any volunteer to jump side by side with him?

A brief stop just to get back on track plenty of power yelling “Ya no sos igual” to any friend who forgot the important things in life: drinking beer and look for a fight at the football court. Special mention should be made of a couple of local punks shooking  their mohawk to the rhythm of this song. It is definitely clear that you can find ex-friends everywhere.

These guys will not leave the stage before inviting “Caramelo de limón” and impel us to sing “piñas van, piñas vienen, los muchachos se entretienen”. The attendance asked for more. Albeit  the expression on their faces, shaken up with happiness, the sweat running down their foreheads and the will to have a beer, eventually descend them to the ground floor. Then it was all chatting and remember why some bands will forever be in our hearts. Just like 2 Minutos.

No need to invoke the spirit of despicable Mr. Scrooge in any case- (The first one. The fierce. Later went worse!!) –, must confess that I do not have a special fondness for Christmas time. This is just something that has been occurring. In my childhood years, Christmas was full of magic. When growing up, logically that plot slowly fell down.

However, last Christmas came a surprise hardly to forget. The Beatles on Spotify. No previous warning. Overnight a post published in different social networks announced that “Tonight” – Hell, yes!! TONIGHT!! – the catalogue of the most important band in history will be available on my mobile for my use and enjoyment.

I know “Liverpudlians’” discography by heart. Yet they are so good – and me so fanatical – that for each new listening I hear something not noticed before. I swear. None in the millions of previous plays. Not that makes this year’s Christmas present one of the best, by any measurement you wish to adopt?

But why? Why on Spotify? Why when they were the last white rhino.

One after another the great old dinosaurs in this business (when this business was profitable) have been “giving” their songs to the Swedish platform. Pink Floyd, Led Zeppelin, AC / DC … even that two-cretin-brothers-band ended up there.

(Now that I come to think of it… . The Canadian has withdrawn his entire discography of Spotify claiming for it the poor quality of reproduction … .Gosh!! How could not love him??)

Thom Yorke, one of the most ardent fighters against Spotify, admitted that the revenues he earned from Spotify streaming were a ridiculous amount. Have the Fab Four, or their legal heirs, achieved a better deal maybe? Perhaps some of the most important works of popular music in the last century still persuasive arguments to negotiate. 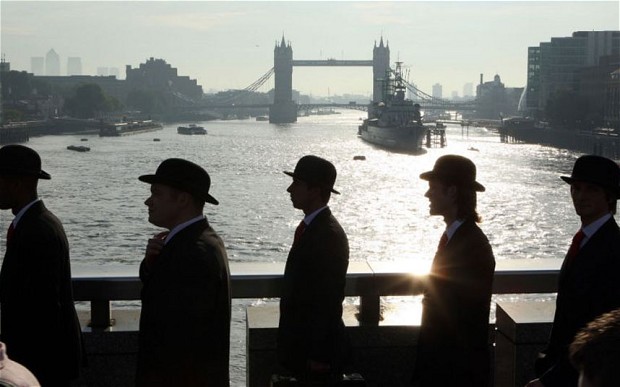 London´s relationship with its own financial power has a somewhat dose of nonchalance. The city, along with Wall Street, is proud stronghold of Planet Money. Continuously renowned financial institutions, recognize the British capital as the ideal place to develop business and long-term projects.

At the same time, a rampant housing market spoiled by some of the cocky guys in the City of London, attracts increasing investments from all over the world – some of them suspiciously whiffing – and raises the “price per square meter” –  square feet, here – even beyond bearable for average income. Truly a heavy weight for all the inhabitants of this city. A few days ago, Charlie, an honest employee of a real estate firm, told me that he had begun to study marketing at the University, but eventually realized that there was not much future in doing so, and that it was far more rewarding show properties to marketeers coming from abroad. And how right he is!

One looks at the proud skyscrapers of the City of London, most of them accompanied by giant-alike cranes, and can only think that the current housing bubble is here to stay. This endless race-to-the-top seems a continuous competition to occupy more space than desirable, somehow blocking the routes of planes heading to Heathrow or London City Airport.

Against this backdrop, still refreshing that Londoners do not stop giving nicknames to identify their giants. Arguably they find a bit ridiculous using the names of large corporations to define such a part of the city landscape. At the end of the day; does someone really knows what the Salesforce Tower is? Where to find the old Swiss Re building, either? If you´d called them by their real names… well, maybe…

Every time a band you liked much disappears a strange feeling overtakes. Halfway between sadness and nostalgia; when frequently, time enough was not to miss them.

I stumbled upon Niño y Pistola in one of those festivals that Radio 3 runs annually in Madrid under the name “La Radio Encendida”. They were playing in the patio; so inviting for talks and exhibitions while so cold for concerts. Vividly remember their sharp guitars and a somewhat retracted attitude. Certainly, more attentive to combat the horrific acoustics of that courtyard than to achieve entertain for the few 70 people there.

I liked them. However enough not to follow or spark an interest in his life and miracles. In addition, and right after in the auditorium, Pony Bravo assaulted the concurrency displaying their lysergic surrealism and acid lyrics. That I kept in mind.

Our paths crossed again. “There’s a man with a gun over there” , showcasing  that Buffalo Springfield title, could not be a bad album whatsoever. By all means, not was! Well crafted vocal harmonies, thundering guitars and Neil Young´s spirit flooding. Where have you been all my life? Are you the same guys at that retracted concert in Madrid four years ago?

They then made an EP with four songs. No time for more. Besides thinking something big has been lost, maybe it’s better so.

“My name is Clint Stafford and I´d like to know: when did you actually start getting into soul music?

Today, it’s no secret the racial “problem” in the United States. Forty years ago was even worse. In this context, an English whitey presenting his “blue-eyed soul” songs  in the sacrosanct Soul train, is not something that happens often.

Unless your name is David Bowie.

If so, you can be whoever you want. You can be a pompous mod. Also a hippie singer. The first glam – superstar – before – glam.  An oversexed alien who later commits suicide and resurrects as an Orwellian man-dog . And a soul man; yes indeed!

Having said this, the acting is pretty poor. A playback on Soul Train is only accountable because of a panic attack (Yes, the White Duke had them often). The previous interview does nothing but confirm this theory.